On 19 June 2020, the United Nations Human Rights Council adopted a resolution requesting the United Nations High Commissioner for Human Rights, Michelle Bachelet, “to prepare a report on systemic racism, violations of international human rights law against Africans and people of African descent by law enforcement agencies, especially those incidents that resulted in the death of George Floyd and other Africans and people of African descent, to contribute to accountability and redress for victims”. 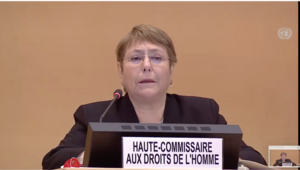 A recording of the debate and a full list of speakers can be found here.

The urgent debate was called after families of victims of police killings in the United States — together with more than 660 human rights organizations globally — wrote a joint letter to the UN Human Rights Council. The letter called for United Nations Human Rights Council member states “to urgently convene a Special Session on the situation of human rights in the United States in order to respond to the unfolding grave human rights crisis borne out of the repression of nationwide protests”.

The protests, which eventually spread around the world, erupted in the United States on May 26 following the murder, by police officers, of George Floyd in Minneapolis, Minnesota. The letter noted that Mr. Floyd’s murder — which was captured in a video captured by a bystander — “was only one of a recent string of unlawful killings of unarmed Black people by police and armed white vigilantes”.

In June 2021, the Minneapolis police officer, Derek Chauvin, was sentenced to 22 ½ years in prison for Floyd’s murder.

In its joint letter, the group added that it was also “deeply concerned about the escalation in violent police responses to largely peaceful protests in the United States, which included the use of rubber bullets, teargas, pepper spray and in some cases live ammunition, in violation of international standards on the use of force and management of assemblies, including the recent U.N. Guidance on Less Lethal Weapons”.

Marches for racial justice and equality around the world

In her opening statement, Amina Mohammed, the Deputy Secretary-General of the United Nations, said the Human Rights Council was meeting “as marches for racial justice and equality fill the streets of cities or towns around the world”.

Mohammed added that the United Nations was duty-bound “to respond to the anguish that has been felt by so many, for so long”. 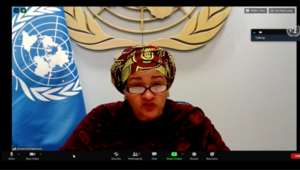 Amina J. Mohammed, the Deputy Secretary-General of the United Nations  (at 4min 40 sec).

Calling the murder of George Floyd “an appalling act of … police brutality”, Mohammed added: “I wish to echo the recent cogent words of the Under Secretary-Generals of the UN, who are Africans or of African descent. In a statement three days ago, they stressed that ‘not enough can ever be said about the deep trauma and intergenerational suffering that has resulted from racial injustice … particularly against people of African descent. To merely condemn expressions and acts of racism is not enough. We must go beyond and do more.”

“Just as we fought apartheid,” she said, “so must we fight the hatred, oppression and humiliation today … Across the world, Afro-descendants continue to be trapped in generational cycles of poverty, created by unfair obstacles of their development. They receive unequal services and safe and justifiable housing and employment practices. Racial profiling is widespread. And because of poverty and structural racism, they’re also among the communities hardest hit by COVID-19. As we recover from the pandemic, returning to these systems is absolutely out of the question.”

A situation that calls for action

Tendayi Achiume, theSpecial Rapporteur on Racism, Racial Discrimination, Xenophobia and Related Intolerance, said: “Among our jobs as independent experts appointed by the Human Rights Council is to sound the alarm in the face of grave human rights violations. And the situation in the United States has prompted us to do so.” 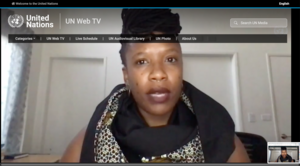 Achiume said she was also speaking on behalf of the Working Group of Experts on People of African Descent in a statement which was also joined by the Special Rapporteur on the Rights of Freedom of Assembly and Association and the Coordination Committee of the UN Human Rights Special Procedures.

“Our collective analysis is that in the United States, the problem is not limited to specific enforcement practices or individual officers,” Achiume said. “It extends to the laws and the policies governing law enforcement. For people of African descent in the United States, the domestic system has utterly failed to acknowledge and confront racial injustice and discrimination. This injustice and discrimination is so deeply entrenched in law enforcement that even during this period of uprising, reports continue of extrajudicial killings of black people by the police. This injustice and discrimination also affects other racial and ethnic minorities. And despite several decades of policing reform, executive intervention and judicial oversight, this violence and racial injustice persists.”

Because of this, Achiume called for the establishment of an international commission of inquiry which would have “the necessary authority to investigate systemic racism in law enforcement in the United States”.

“Failure to do so,” she said, “would be to deny people of African descent in the United States the opportunity to draw on the global human rights system to challenge entrenched racial injustice.”

“Systemic Racism and law enforcement is of urgent global concern”

Achiume added: “The widespread and transnational nature of the protests we are seeing, speak to the fact that systemic racism and law enforcement is also of urgent global concern. The massive transnational public outcry, including mobilization of people all over the world, reflects their parallel, if not identical, local concerns with systemic racism in law enforcement.”

Speaking on behalf of the European Union, Emin Aslanov, said the continued incidents of racially motivated violence around the world “demonstrates that there is a continuous need to step up our efforts and actions to prevent hate crimes. discrimination, racism, xenophobia and related intolerance”.

“Racial discrimination runs against the values and principles of the European Union, universal human rights and fundamental freedoms. It will never be tolerated. All societies must remain vigilant against the excessive use of force, and ensure that all such situations are addressed safely, effectively, and in full respect for the rule of law and human rights,” Aslanov said.

He added that the European Union “would continue calling on all states to uphold the rights to participate in public affairs, freedom of peaceful assembly and association, including for human rights defenders and peaceful protesters, as well as freedom of opinion and expression online and offline, with particular emphasis on the safety of journalists, bloggers, and other media workers. We believe that it is time to unite in a firm global collective response, which leaves no room for complacency and requires political leadership and strict enforcement of legal commitments.”

In addition to the preparation of a report on systemic racism and violations of international human rights law against Africans and people of African descent by law enforcement agencies, the resolution also requests the High Commissioner to examine government responses to anti-racism peaceful protests, including the alleged use of excessive force against protesters, bystanders and journalists.

It also calls upon all States and all relevant stakeholders to cooperate fully with the High Commissioner in the preparation of the report.

While not legally binding, the recommendations seek to “encourage states to address the issues, and civil society can use them to pressure governments to take concrete steps”.

Commenting on the resolution, the European Journal of international Law, wrote that, “notwithstanding the initial sense of disappointment surrounding the adopted resolution [failing to set up a commission of enquiry] … the text ‘opens the door to bring[ing] increased international attention to violations both by the U.S. and other powerful states in future’, while the High Commissioner’s report it mandates ‘could provide a useful opportunity for continued advocacy for meaningful change’ and ‘a tool for documenting injustices and violations in the U.S. and elsewhere.’

“Moreover,” it notes, “as a result of the resolution, the debate and the prior outputs of UN experts, systemic racism has suddenly and justifiably become once again a major subject of UN concern in a way that has not been seen since the end of apartheid; the internationalisation of a global fight for racial justice has been revived.”

*Carl Collison is a freelance journalist, photographer and film-maker, who focuses specifically on producing LGBTIQ-related content from across Africa. He was shortlisted for the 2018 Gerald Kraak Award and Anthology, which celebrates excellence in queer writing and photography from across Africa. This year, he was included in Exit magazine’s list of Queer Warriors, a list made of 20 people globally who are fighting for achieving queer liberation on the African continent.

A recording of the debate and a full list of speakers can be found here.

The resolution can be downloaded here.