The year 2020 marks the 25th anniversary of the Fourth World Conference on Women in Beijing. In early October 2020 the anniversary was celebrated during the 75th session of the United Nations General Assembly in New York with a high-level event and many speakers.

A key result of the Fourth World Conference on Women in Beijing in 1995 was its Platform for Action, in which 189 countries specified twelve strategic goals for gender equality. Although important progress has been made since 1995 such as a decrease in maternal mortality rates, the speakers at the high-level event at the 75th session of the UN General Assembly all agreed that not enough has been done.

“Yet no country can claim to have achieved gender parity, and the current crisis threatens to erode hard-earned gains,” said the president of the 75th General Assembly, Volkan Bozkir, at the event entitled “Accelerating the realization of gender equality and the empowerment of all women and girls.” UN General Secretary António Guterres also warned of setbacks. “Covid-19 could wipe out a generation of fragile progress toward gender equality.”

Push-back movements in many countries

“Women are calling for a leapfrog to 50 per cent representation, or parity in all spheres,” said the executive director of UN Women, Phumzile Mlambo-Ngcuka. “Women’s leadership, including young women, is vital in the face of an urgent need to rebuild better after Covid-19. Women and the people of the world are demanding these changes.” 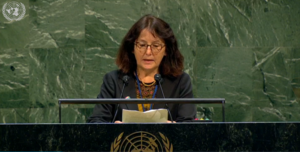 Dubravka Šimonovic, OHCHR Special Rapporteur on violence against women, called for a global implementation plan to combat violence against women, its causes and its effects. She pointed to the backlash currently underway. “We need to focus on push-back movements, we have seen that such movements have stopped ratification of the Istanbul convention in some countries, they have stopped changes of discriminatory parts of constitutions in some countries and of discriminatory laws.” 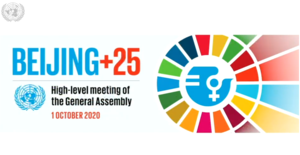 No development without gender equality

The demands of the Beijing Platform for Action are confirmed in the UN’s 2030 Agenda for Sustainable Development, in which there is no development without gender equality. Civil society is called upon to join with governments in the “Beijing +25 process”. The UN Women’s Generation Equality Forum campaign seeks to network the next generation of activists with each other to transform society. The Generation Equality Forums planned for Mexico City and Paris in 2020 were postponed to June 2021 on account of the Covid-19 pandemic.

The year 2020 marks 25 years since 189 countries signed the Beijing Platform for Action at the Fourth World Conference on Women in 1995. But why exactly is this celebrated as such an important milestone in the fight for gender equality and women’s rights?
Source: UN Women on Youtube

In 2020, the global community will mark the twenty-fifth anniversary of the Fourth World Conference on Women and adoption of the Beijing Declaration and Platform for Action (1995). A five-year milestone will be reached towards achieving the Sustainable Development Goals of the 2030 Agenda for Sustainable Development. 2020 is therefore a pivotal year for the accelerated realization of gender equality and the empowerment of all women and girls, everywhere.
Source: UN Women on Youtube