Defending the patriarchy as the root of opposition to SRHR

What does the term “sexual and reproductive health and rights” – or SRHR for short – actually mean? What role do its topics play in international discussions of human rights? Where are these issues debated and negotiated, and who are the main actors? Katrin Erlingsen from the Deutschen Stiftung Weltbevölkerung (DSW) explained the concept of SRHR in a web seminar from the Hirschfeld-Eddy Foundation. 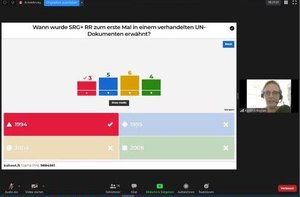 The concept of SRHR emerged from the paradigm shift that arose with the International Conference on Population and Development in Cairo in 1994. Instead of addressing population issues from an economic meta-perspective as previously done, this conference focused on the individual. The international community agreed that the right to decide about one’s own body, partnership and number of children is grounded in universal human rights. This set of topics has since been summarized under the heading “sexual and reproductive health and rights” or SRHR. At the Beijing World Conference on Women in 1995, the term was confirmed as a key element in self-determination by women and girls.

“Reproductive health refers to physical, mental and social well-being with respect to one’s reproductive system, not only to the absence of disease,” explained Katrin Erlingsen at the online seminar. “That means people should be able to have satisfying sex lives and to have children if they wish so, and to decide freely about these matters.” In addition, every individual has the right to comprehensive sexuality education and to safe modern methods of contraception. Good pregnancy and birth-related care should be available as well. Reproductive health also includes sexual health, which means a state of physical, emotional, mental and social well-being in relation to sexuality – and again not merely the absence of disease, dysfunction or infirmity.

As for reproductive rights, they include the right to freedom from discrimination, force and violence in deciding whether, when, and how many children to have. These rights should form the basis for family planning programs and promote gender equality. Young people should have access to information that enables them to engage positively with their sexuality. The international community has thus far not been able to agree on how to define sexual rights. According to the WHO, sexual rights include the right to live one’s own sexuality free of discrimination – regardless of one’s sexual orientation or gender identity (SOGI).

Various different bodies at the United Nations discuss SRHR and SOGI, and there are also ways for civil society to join these discussions. One place is at the UN Human Rights Council, for example in connection with the UPR (Universal Periodic Review) process by which states evaluate each other in how they are putting human rights into practice. Strong coalitions of civil society organizations are active in the Commission on Population and Development (CPD) which monitors implementation of the Cairo Programme of Action, and in the UN Commission on the Status of Women (Commission on the Status of Women, CSW). SRHR are also included in the UN’s 2030 Agenda for Sustainable Development, formulated in 2015, whose core is a list of 17 Sustainable Development Goals (Sustainable Development Goals ‒ SDGs) although it was not possible to include sexual rights in these goals.

“SRHR activists often work very constructively and strategically together with SOGI activists,” reported Erlingsen. As Sarah Kohrt added, “It is precisely this type of solidarity-based cooperation that is so important in light of growing opposition. That’s a great example of it. LGBTI rights and sexual and reproductive rights are very closely connected. Among other reasons, because the attacks on them come from the same direction.” 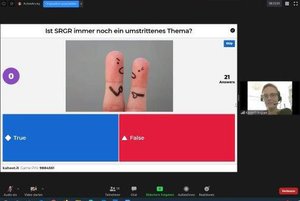 Opposition to sexual and reproductive health and rights has grown, especially since Donald Trump took office. “Sexual and reproductive health and rights are still a controversial topic at the UN,” noted Erlingsen. Unusual coalitions have arisen, such as the USA, Russia, Saudi Arabia, Yemen, Hungary and Jamaica, which join forces against sexuality education, abortion and diverse family forms. “The roots of opposition often lie in a wish to defend the patriarchy and existing structures of power and influence,” she added. These groups, which are united in opposition to women’s and LGBTI rights, are well organized and funded, for example by the Catholic Church. That makes strong civil society coalitions all the more crucial in promoting SRHR.

“It is important to strengthen the UN system and ensure that it continues to exist and is not undermined and abused by those who seek to weaken it,” urged Erlingsen. “That is the only way for us to protect the UN as a place where international norms can be further developed and then promoted on national levels.” Germany must maintain its progressive position in this area, ideally also combined with self-reflection and awareness of its own forms of discrimination.

As the world focuses on the post-2015 development goals, you may hear a lot of buzz about sexual and reproductive health and rights (SRHR) – but what do we mean and why does it matter? The evidence is clear: SRHR has a powerful ripple effect that not only transforms the lives of individuals, but of communities, nations and our world. It begins with one; it matters to everyone.