How is civil society advocating at the UN for the rights of LBTQ women? How can successes achieved by e.g. the CEDAW Committee be used to move national policies forward? What experience has been gained in strategic processes and community-based lobbying? ILGA World held a web seminar on this topic together with IWRAW Asia Pacific and RFSL in April 2020.

“CEDAW creates the space for political advocacy, it has a specific focus on women’s rights and on marginalized communities in which NGOs play an important role,” said Marisa Hutchinson from International Women’s Rights Action Watch Asia Pacific (IWRAW). Her organization supports activists during the CEDAW reporting process by mentoring them on tactical and strategic lobbying. 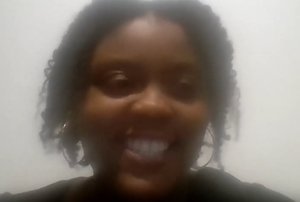 CEDAW, the Convention on the Elimination of All Forms of Discrimination against Women, was adopted by the UN General Assembly in 1979 and has been ratified by 189 countries. The CEDAW Committee at the UN is an independent body of experts that monitors implementation of the CEDAW Convention. It meets three times a year. “It creates space for women’s groups and activists to share solidarity and knowledge of their common goals and priorities in terms of women’s human rights,” said Hutchinson. 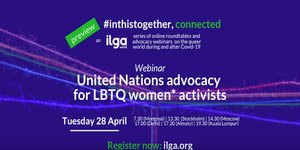 Speaking up at the UN Human Rights Council

Another way for NGOs or activists to become active at the United Nations is with the UN Human Rights Council. Although SOGIESC topics, i.e. sexual orientation, gender identity and expression, and sex characteristics, were still very controversial until recently, the situation is now better. “Especially since the first resolution in 2011 that condemned violence and discrimination against LGBTI people,” noted Rashima Kwatra from the Swedish LGBTI organization RFSL, adding that “it’s easy for governments to deny rights to LGBTI people if we’re not there in the room to speak up.” 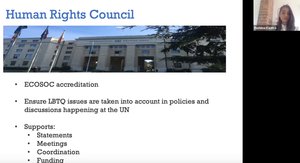 Kwatra drew attention to the UPR process at the UN, in which countries review each other’s human rights performance every five years and make recommendations. NGOs can contribute shadow reports in the lead-up to these reviews. Civil society organizations with ECOSOC status can also vote and make statements during sessions of the UN Human Rights Council, encourage activists to speak with their countries’ Permanent Missions to the UN and raise their awareness of (a lack of) LGBTI rights. A good practical example is the annual UN-Trans Advocacy Week (TAW) that is organized by the Asia Pacific Transgender Network (APTN) together with Global Action for Trans Equality (GATE), ILGA World, RFSL, and Transgender Europe (TGEU). As part of the week’s activities, numerous international activists are invited to Geneva to actively participate in the Human Rights Council and lobby for trans rights in their countries.

Broad opposition at the CSW

The Commission on the Status of Women (CSW) is another important body at the United Nations. It meets every year in New York to evaluate gender equality and women’s rights and empowerment. “It is an extremely difficult environment to work in, a lot of opposition, extremely homo- and transphobic,” said Kwatra, yet also “an extremely important space to ensure that countries do not fall back and regress on important achievements that have been made, and are held accountable on their commitments to reaching gender equality.” The Swedish NGO RFSL works closely together with various networks such as the LBTI Caucus and the larger Women’s rights Caucus. Every year RFSL also enables 15 activists from the Global South and East to attend a 13-month intensive training program in Geneva and New York with the Rainbow Advocacy Program. 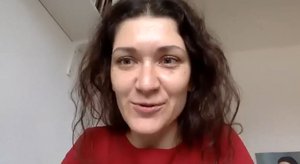 Ksenya Kirichenko from ILGA World explained how human rights instruments work at the UN and reported on the Treaty Bodies and the Special Procedures. The Special Procedures have mandates on specific topics or countries. Of special interest for LBTI rights are the Working Group on discrimination against women, the Special Rapporteur on violence against women, and the Independent Expert on protection against discrimination and violence based on sexual orientation and gender identity. Their main methods of work include country visits, statements, and special reports.

NGOs can get involved in different ways, for example by compiling shadow reports, attending sessions, monitoring and doing follow-ups. This pays off. “In 2018 ILGA focused on LBTQ women and their engagement with CEDAW, we connected with them and had the highest number of LBTI references and recommendations by CEDAW in 2018!”, said Kirichenko in emphasizing the value of taking action.

“After a violation you can write to Special Procedures with online forms, it is simple, especially in case of imminent violations or risks or discriminatory legislation,” said Kirichenko and encouraged participants to make use of this possibility. She noted that ILGA World had given information about LBTQI women to the Special Rapporteur on violence against women for the Special Rapporteur’s reports on gender-specific violence during Covid-19 and on rape as a grave violation of human rights. ILGA World has also worked with multiple groups from different regions and countries to support their shadow reports to the Treaty Bodies, especially CEDAW. The deadline for NGOs to submit reports to the Special Rapporteur on violence against women on the topic of rape has been extended to 31 December 2020.

Toward the end of the web seminar the two Russian lawyers Svetlana Gromova and Valentina Frolova reported on a case they brought to the CEDAW Committee after exhausting domestic avenues of legal action. It had to do with an attack on a lesbian couple in Russia, for whom justice was impeded. The CEDAW Committee came to the conclusion that Russia had violated several articles of the CEDAW Convention, and made recommendations for the country to take. “For the first time CEDAW addressed the issue of discrimination against lesbian women in the context of homophobic violence,” said Frolova and went on to describe the recommendations. The Russian authorities should provide compensation and psychological treatment, and also take specific measures on a widespread basis such as providing special training for police and other law enforcement authorities on hate crimes and gender-specific violence. In addition, the Committee stated that the state needs to ensure access to judicial action for victims, and that negative stereotypes of lesbian women can promote obstruction of justice. This case could therefore be a precedent in pointing to violence against lesbians and insisting on judicial action in the future.

The web seminar concluded with additional reports by local activists from India and Kazakhstan who also spoke about their involvement with the UN.